Clouds in Water Zen Center follows in the lineage of Dainin Katagiri Roshi, a Soto Zen monk who came to this country from Japan in the early 1960s. He worked with Shunryu Suzuki Roshi for ten years at San Francisco Zen Center and came to Minnesota in 1972 to found the Minnesota Zen Meditation Center.

His Dharma heir, Dosho Mike Port, founded Clouds in Water Zen Center in 1994 and was the Guiding Teacher and executive director until 2004. Byakuren Judith Ragir succeeded him in 2006; as Guiding Teacher she played an instrumental role in developing the center. She stepped down from her role in 2015 and was succeeded as Guiding Teacher by Sosan Theresa Flynn. 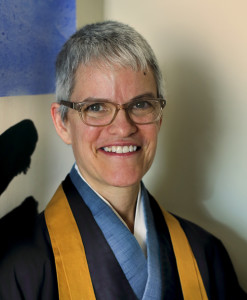 In 2015 Clouds in Water purchased its own building at the site of the former St. Paul Builders' Exchange at 445 Farrington St. in the historic Rondo District of St. Paul.

For more information on Sosan (pictured at right) and all of our teachers, see this page.